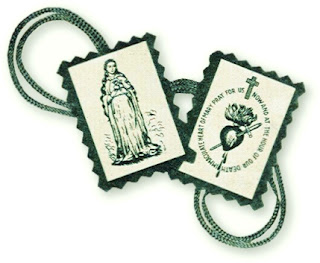 "I shall bless all hearts on earth who spread devotion to my Green Scapular.
It is my Immaculate Heart."

Sister Justine Bisqueburu was our Lady's choice for the Green Scapular, as Sister Catherine was her choice for the Medal of the Immaculate Conception. They were contemporaneous Sisters of Charity of St. Vincent de Paul.

In contrast to Sister Labouré's oblivious retirement, Sister Bisqueburu was to head military hospitals in Paris and Algiers, she was to be seen spending three days and three nights on the battlefield of Mentana, would organize ambulance corps in Rome, and accompany Pius IX on walks in his private garden.

Almost nothing is known of her life prior to her entry into the Sisters of Charity. Two coincidences stand out in the foreground of her career: on her journey from Pau to Paris to embrace the religious life, she was accompanied by Father Aladel, her future spiritual director, who had also been the director of Sister Catherine Labouré. She entered the seminary there on November 27,1839, on the ninth anniversary of our Lady's Miraculous Medal apparition to St. Catherine.

Sister Justine was making her entrance retreat when she was favored with her first vision of our Blessed Lady before the Blessed Virgin's statue in the retreat hall on January 28, 1840. This sister was at prayer when our Lady appeared dressed in white, her feet bare and showing just below the hem of the white gown over which there was a mantle of blue. Unlike most of her other apparitions, she wore no veil, but instead her hair hung loose about her shoulders. She was holding her heart in her hand, from the top of which leapt flames of fire. The sister was awe-struck by her heavenly beauty and majesty. Four or five times during the year, on principal feasts of the Blessed Virgin, the vision reappeared. During meditation on September 8, 1840, feast of the Nativity of Mary, Our Lady held her heart in one hand and a green scapular in the other. It was not the conventional type of scapular, but only one rectangular piece of green cloth, fastened to a green string to be placed about the neck. On one side of this was a picture of our Lady as she had appeared previously. On the other, in the words of Sister Justine, there was 'a heart all ablaze with rays more dazzling than the sun, and as transparent as crystal." The heart, emitting flames and pierced with a sword was surrounded with a circular inscription, over which was a gold cross. The inscription was an ejaculatory prayer:

"Immaculate Heart of Mary, pray for us now and at the hour of our death.'

The green scapular, or "Badge of the Immaculate Heart of Mary," as it is variously called, was to be an instrument for the Daughters of Charity to be used in the conversion of sinners and infidels, especially in the matter of obtaining for them the grace of a happy death, Sister Justine was told. The interior voice also made known to her that they were to be made and distributed as soon as possible. The report of the apparition and the requests of our Lady were reported to Sister Justine's superior with the utmost of caution and deference.

The same vision reoccurred on August 15, 1840, and September 13,1841. A message was sent to Father Aladel. He apparently thought nothing of it and dismissed the whole matter. Nothing was done about the making and distribution of the scapular. In a vision of May 3,1842, after her Holy Communion thanksgiving, the Blessed Virgin complained of this to Sister Bisqueburu. Our Lady said she was displeased because of the delay. This message was conveyed to Father Aladel and he seemed to rush matters. At last the scapular was made, but not in large quantities, and its use seemed to be experimental and without enthusiasm. In successive apparitions during 1846, Our Lady objected many times of the protracted delays and lack of confidence with which the scapular was used. In desperation, Sister Justine wrote her superior:

"It is absolutely necessary that Father Aladel attend to the Scapular, that he should disseminate it and do so with confidence. Heretofore, I am sure, he did not attach great importance to it. He was very wrong. True, I do not deserve to be believed, for I am only a poor girl in every respect. May I entreat him to do this, not for my sake, but I ask him in the name of Mary to do it for these poor souls who die without knowing the true religion; yes, if it be givenwith confidence, there will be a great number of conversions. ...Answer me, I beg of you, as soon as possible; we cannot lose any time."

The Green Scapular was to be different from every other scapular in one respect. It was not a habit or insignia of any confraternity, and therefore no formula or imposition was necessary. It had merely to be blessed by a priest and worn like a medal, and the wearer was obliged to say once a day the prayer inscribed on it:

"Immaculate Heart of Mary, pray for us now and at the hour of our death."

In the case of sinners or infidels, the scapular could be placed in a bed or room, or sewn or slipped unknown to the person into his clothing, and the benefactor could say the prayer in his stead. Different kinds of rays fell from the Blessed Virgin's hands in the vision, signifying that the graces obtained from its use would be greater or less in proportion to the degree of confidence on the part of the devotee. Subsequent approval was climaxed by the favorable reception of the scapular by Pope Pius XI, who placed the scapular on his desk with the Miraculous Medal.
The Green Scapular was the occasion of all manner of graces, of favors and cures; it is not to our purpose to cite them here. What is important to our thesis is that the Immaculate Heart of Mary was attested to by our Lady herself in anticipation to the coming of her age. Here again she was presaging the great climax in the Message of Fatima where she said:

"Jesus wishes His Sacred Heart honored in union with my Immaculate Heart."

Again on July 13 after the children of Fatima had seen the vision of hell:

"You have just seen hell where the souls of sinners will suffer forever. To save souls from hell, God wishes to establish in the world devotion to my Immaculate Heart."

The Immaculate Conception was heralded with Catherine Labouré and her Medal; it appeared with the Sacred Heart of Jesus on the back of the medal. The Immaculate Heart of Mary was proclaimed again with the Green Scapular; likewise the Sacred Heart of Jesus and Mary were correlated on the back of the scapular. The reverse of the medal consisted of a large "M" surmounted by a cross upright on a bar supported by the letter. Beneath the letter was the Sacred Heart on the left, crowned with thorns and across rising out of flames issuing from the top; the Immaculate Heart of Mary as on the Green Scapular was to the right, pierced with a sword, and the same flames rising forth. All was encircled by a diadem of twelve stars. St. John speaks in the Apocalypse of the "Woman clothed with the sun, the moon under her feet, and on her head a crown of twelve stars.' She had come!

The particular power of this scapular is to help in the conversion of sinners, and in obtaining for them the grace of a happy death.

To complete the correlation there was the red scapular, given during the same period to another Sister of Charity. On July 29, 1846, another Daughter of Charity, Sister Appoline Andriveau, was favored by an apparition of our Lord, Who revealed to her a new scapular of a red color, on which, next to His Heart, was also that of His Mother, and which for this reason received the name of Scapular of the Sacred Hearts of Jesus and Mary.

Our Lady was building the edifice of devotion to her Immaculate Heart to save souls from hell with many means, long before her greatest plea at Fatima in 1917. The Marian Age was speedily under way; the opening strokes were completed; the essential cores were wound and energized.
-from Recent Apparitions of the Blessed Virgin Mary, by Stephen Breen.

Practices
1. Wear or carry the scapular
2. To help another, place it in their vicinity (i.e. their room)
3. Pray, at least daily: "Immaculate Heart of Mary, pray for us now and at the hour of our death"
4. The prayer should be said for oneself and separately for each person to whom it has been given (unless they pray themselves)
5. No enrollment of any kind is necessary, but each scapular should be blessed by a priest (general blessing of sacramentals)
6. Have confidence in the effects of the scapular:

"The greatest graces come from using the scapular but these graces come in direct proportion to the degree of confidence in me which the user has."

The Green Scapular was twice approved by Pope Pius IX, in 1863, and again in 1870 when he said: “Write to these good Sisters that I authorize them to make and distribute it.”

Promises/Benefits
1. Conversion of those who do not have the faith
2. Reconciliation to the Church for those who have lost/strayed from the faith
3. Assurance of a happy death
4. Strengthening of the faith for those already in the Church
5. Protection from Satan for those who wear or promote the scapular
In Jacarei´s Apparitions, Our Lady asked that everybody should use the Scapular which She had reveled on her Apparitions. These sacramental should be used together. 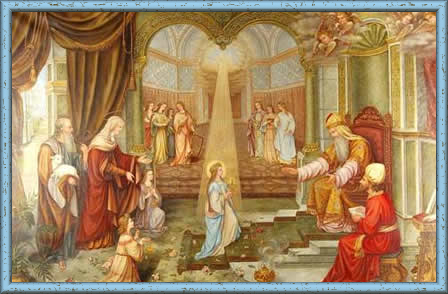